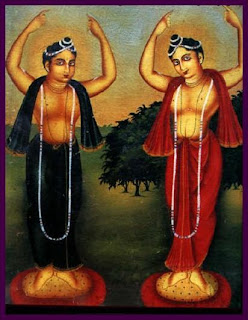 This past Saturday, March 3, was Gaura Purnima, when Gaudiya Vaishnavas celebrate the appearance of Lord Sri Chaitanya Mahaprabhu in this world. Lord Chaitanya's appearance is a mystery and a manifestation of the greatest grace. His most widely available gift is the congregational chanting of the holy names of God, which is the most efficacious means for spiritual realization in the current age.

I always especially like Gaura Purnima because it was just before that festival in 1970 that I formally joined my spiritual master's mission in Honolulu. So it's a little like a birthday for me in a way.

We see Lord Chaitanya on the right in this picture. On His right is Lord Nityananda (His right-hand man), whose mercy is compared to the soothing effect of the light of millions of moons. Together these two brothers inaugurated the chanting of Hare Krishna about 500 years ago in India.

Devotees everywhere mark this festival with grand celebrations marked by congregational chanting of the holy names of Krishna and of Lord Chaitanya. Here's a picture of one such celebration in San Diego, California in 2002. The young women in the front are our two daughters. Krishnamayi, in the green sari, was recovering from a near-fatal bicycle accident. Lalasamayi, in the blue sari, lovingly nursed her sister back to health. This was Krishnamayi's first public outing after the accident. 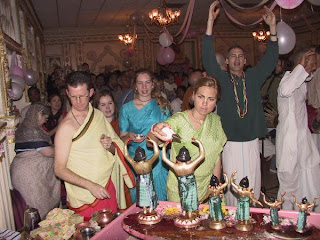 Where did you get the nice picture of Sri Nitai-Gaur? It looks quite different from the one's I have seen. The overall colour especially highlights the complexion of Gaura.

Malati, I honestly don't remember at all where I found that picture. Sweet, no? I have another picture that I really love, and which I ought to have scanned. It's a picture of Nitai and Goursundar, with Nityananda sort of holding Mahaprabhu up, His hand over Gaura's heart. This picture is very special to me. It was given to me in 1985 by Visvambhara Goswami, who was then mahant of Radha-Ramana temple in Vrindavan. When he gave it to me, he said that if we kept this picture nicely in our home, we would always be blessed with Lord Chaitanya and Nityananda's mercy.

just checking up on you from time to time...you haven't posted anything in awhile.Maybe you you could give a synopsis of adwaita acarya's asking the lord to come : Reasons why, how, and tips of how we can follow his example for those of us in the snowy north with out the C.C or a lot of time (new baby joy) love Mayi

Mayi, I'm sorry I haven't responded to this much earlier. This is a good idea, maybe even a great one. I'll put it on my list. As for the Caitanya-caritamrita, check the mail some time soon. 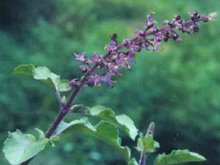